Death Robots From Mars My life in outer space 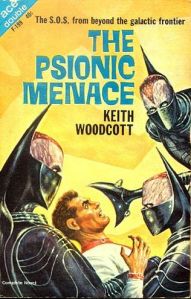 “The S.O.S from beyond the Galactic Frontier

MUST THE UNIVERSE DIE WITH THEM?

The Starfolk, arrogant masters of vast stretches of the cosmos beyond
the Earth’s sphere of influence, were determined to complete the
extermination of the mind-reading mutants on Regnier’s planet.

But to the mutants themselves, the terror of the Starfolk was nothing
compared to the greater dread that gripped their spirits – the
obsession that the universe itself was doomed. This obsession ripped
into their minds, overwhelmed them, and plunged them into horrifying
hysteria.

The message of doom reached the ears of the Starfolk themselves,
forcing them to a fateful decision. They would allow an Earthman,
archaeologist Philip Gascon, to visit Regnier in an attempt to unravel
its secrets. What he found would either contain the key to the ultimate
destiny of the universe – or the date of doomsday.

For him the secret of death contained the meaning of life.

He could unravel men’s thoughts, but not the mystery buried in his own
soul.

She was young in years, but old in the ways of pain.

Proud and ruthless, he used people for toys – and found the game was
for real.

He was his masters’ voice, until they decided to listen to someone else.

Cunning dictated his every move, but even he couldn’t unfathom the
message of doom.”

This is quite an intriguing and enjoyable little piece, set at a time when Humanity has settled several worlds and discovered artefacts left by a vanished Elder Race. A spaceborne civilisation, The Starfolk, has emerged with delusions of being a master race, but because their reproductive capabilities are curtailed by the radiation of outer space, they use the planets they service with goods and technology as a gene pool from which to select breeding stock. Since expanding to the stars telepathic humans, the Psions of the title, are being born into human communities.
Recently, the Psions are suffering, because they are all receiving a telepathic message or vision, which warns of the end of everything.
The novel does provide some interesting characters. Harys Fold is some sort of Earth government intelligence officer, with impressive deductive powers. When he hears of a man found in the desert after an encounter with a distressed psion, a man who is not only a cosmoarchaeology student, but a ‘psinul’ (unreadable by psions) he concocts a plan to solve the mystery of the cosmic message of doom, which has a connection with Regnier’s planet, a world controlled by the Starfolk, where Psions are persecuted.
However, one gets the impression that Brunner had written himself into a corner toward the end since the resolution seems somewhat badly contrived. Given a longer format and some time for a decent edit this could well have been a far better novel, set as it is in a quite interesting universe with a decent stab at some characterisation.
It would be interesting to discover if Christopher Evans had ever read this novel since although the premise of ESP-capable humans emerging as an evolutionary development is not a new one, the phrase ‘psinul’ is used in the same context within the TV series he created, ‘The Tomorrow People’ some ten years later than this publication, and the series is based around the idea of ESP-capable humans emerging within the population as the first examples of Homo Superior.

This entry was posted on February 25, 2014 by roddywilliams59. It was filed under 1960s, Ace Doubles, British, Brunner - John, Elder Race, Homo Superior, Psi Powers, Space Opera and was tagged with Human Evolution, Telepathy.